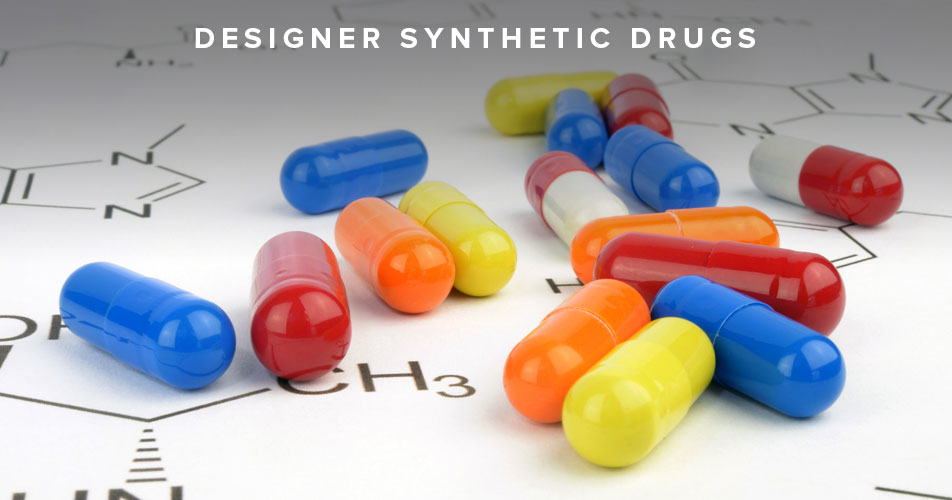 Designer Synthetic Drugs – sounds almost glamorous or exotic doesn’t it? But, Deadly is a better word to describe them.

What do you know about Designer Synthetic Drugs?

Here is a test of your knowledge and some frightening facts.

What are some of the Unknown Dangers of Synthetic Drug Use?

Think again. Between March 7, 2018 and April 25, 2018 alone, 4 people died and over a 150 were hospitalized from synthetic marijuana use in just the State of Illinois.  Two of the dead were only in their 20’s.  Additionally, the problem isspreading into Indiana, Maryland, Missouri, and Wisconsin.

The general cause of problems with “synthetic marijuana”/”fake weed” is that it is mis-named, since these products are not plant derivatives like Marijuana but are human-made mind altering substances that can be up to 85% more dangerous than Marijuana.  In this specific 2018 case, the situation was even more serious —the human-made product was laced with rat poison.Most of the hospital cases involved individuals between the ages of 15to 44 years old, and all cases involved severe bleeding that involved coughing up blood, blood in urine, severe bloody nose and/or bleeding gums.

Not quite. During the week of June 25, 2018, the Harris County (Houston, TX) Sheriff’s Office issued a warning that Fentanyl laced fliers were being placed on car windshields.  Fentanyl is 50 to 100 time more potent than Morphine. A dose as small as 0.25 milligram can kill a person. Without any obvious signs of contamination on the fliers, individuals who removed the them from their car windows in a specific Houston area were exposed and got sick.  The first woman who reported a problem, removed the flier, got sick as she was driving away, and had to be hospitalized immediately.

The statistics aren’t encouraging.  2017 statistics indicated that up to 29% of people prescribed painkillers misused them, became addicted, and doctors were either over-prescribing or not monitoring their use.  Authorities began a crackdown in 2010 on rogue prescribers and the states began prescription drug monitoring programs.  So, then the annual growth rate of deaths involving prescription opioids slowed from 13.4 percent before 2010 to 4.8 percent after.

But, the international drug cartels stepped in to fill the void when individuals who were dependent on prescription drugs and those also “hooked” on any drugs available, looked for all possible alternatives.  Deaths from synthetic opioids and black-market heroin skyrocketed. According to the CDC, the increase in deaths from synthetic opioids such as fentanyl, has grown 84.2 percent each yearfrom 2013 to 2016.

Deaths from Designer Synthetic Drugs are caused because many users do not know exactly what drugs they’re buying and using.  These drugs are considered Designer Synthetics, because they are often made in home-based or non-licensed labs or can be a mixture of prescription drugs and illicitly manufactured synthetic drugs.  Often, buyers are unknowingly getting lethal amounts of synthetic opioids, which include not only illicitly manufactured fentanyl, but things like carfentanyl, an animal tranquilizer that has killed a surprising number of people. Someone surely wouldn’t take an animal tranquilizer? – Maybe not knowingly, but the synthetic substances often are cut into heroin and cocaine or pressed into counterfeit pills that users believe are prescription painkillers or other prescription drugs.

First, people experiencing drug overdoses are lucky if they actually get emergency assistance in time to help them.

If they do get emergency help, there are a few options currently available.

NARCAN® and EVZIO® or generic Naloxone prescription medicines used for the treatment of an opioid emergency or a possible opioid overdose, supposedly cost between $20-$40 dollars for a full naloxone kit, which includes everything a person would need to reverse an overdose.  However, your insurance program may charge you more and/or may not cover this item.

Reactions to severe bleeding, like that with the “synthetic marijuana” rat poison incident, can require high doses of Vitamin K daily for up to 6 months in order to heal the victim and can cost them thousands of dollars.

Emergency rooms service providers, of course, use every option they can try to save a victim that insurance may not pay for, assuming a person has insurance.

However,the current warnings and problems indicate that the treatments for Designer Synthetic Drugs may not work with any of the options.

What Are The Facts Related To Designer Synthetic Drug Abuse?

What Are Some of the Recent Designer Synthetic Drugs?

NOTE:  Special assays must be either used to test separately or included in any multi-drug testing device to test for the following drugs.

Fentanyl has become one of the most dangerous drugs currently being used illicitly. It was originally intended to be used to treat patients with severe pain, or to manage pain after surgery. It is also sometimes used to treat people with chronic pain who are physically tolerant to opiates.  It is so potent, the FDA reported in April 2012 that young children had died or become seriously ill from accidentalexposure to a fentanyl skin patch.  Now illicitly manufactured Fentanyl is contributing to so many deaths because it is being included in multi-drug formats, without the user’s knowledge.

Tramadol was developed with the intention of providing a less addictive alternative to the standard opiates for pain relief.  When abused recreationally, the drug can create an almost immediate sense of euphoria that’s often been compared to a morphine high. When used orally as prescribed, the effect metabolizes at a slower pace.  Abusers generally crush and snort Tramadol to achieve a quicker effect, and overdose often occurs because more than one tablet is crushed, or the user combines its ingestion with alcohol abuse.  Many bad side effects of abuse occur, including seizures and abnormal, rapid heart rate.

The United States has been the biggest global consumer of Oxycodone.  It is often used recreationally because it produces a euphoric high but spotting the signs of abuse are very hard, and many users consider themselves “occasional” users.  However, crushing and snorting the drug, as well as taking it with alcohol has led to substantial statistics on overdose and death, resulting in drug development companies creating versions that lose their potency and convert to a gummy substance when crushed.  But, abuse has  continued at a high level.

Although Buprenorphine was intended as a treatment to help people get off heroin, it has become a popular recreational drug.  It is an inexpensive drug to buy on the street and easier to find than heroin and other opiates.  New users or non-hard-core users like its euphoric high.  Plus, it can be purchased at a lower price than heroin.  Some people use it as a temporary “fix” until they can purchase their drug of choice.  Buprenorphine is less likely to be adulterated, and there is less likelihood for an overdose.

Synthetic Marijuana, often perceived as harmless because of its name, has been causing a notable increase in overdoses and death because of its truly unpredictable chemical components, which are not plant based.  Testing for this drug class generally includes assays for multiple cannabinoid compounds.  See our earlier notes on the dangers.

Ketamine is an anesthetic developed in 1963 to replace PCP and is currently used in human anesthesia and veterinary medicine, with most of it on the street coming out of the veterinary field. It is snorted or swallowed and is odorless and tasteless.  This means it can be added to beverages without being detected, and it induces amnesia. We mention it here because the drug is sometimes given to unsuspecting victims to perpetrate sexual assaults. It can cause dream-like states and hallucinations, with users report sensations like a pleasant feeling of floating to being separated from their bodies. Long term use causes thinking impairment, loss of verbal memory, and loss of psychological well-being.

LSD, or lysergic acid diethylamide, was a commonly abused hallucinogen in the 1960’s and is commonly referred to as “Acid”.  This drug is one we strongly encourage anyone to stay away from so that they aren’t exposed to N-BOMe/25I (see our note later.) Although it is still available from drug traffickers, it is less popular than other synthetic drugs. It is distributed in small tablets, capsules or gelatin squares known as “window panes”, which are often sold on absorbent paper which is then divided into small squares decorated with designs or cartoon characters. It can be administered orally, intravenously or sublingually (dissolved under the tongue). LSD users may experience severe anxiety, paranoia, and panic attacks occur during what are referred to as “bad trips”. Since the drug alters perception, users may engage in dangerous behavior and harm themselves, being unable to differentiate between their imaginations and reality.

Some other Synthetics exist but tests assays are still in development stages or, in the case of Methadone, assays have been available, but Methadone is considered less deadly. Some to watch out for are listed below.

What is the Conclusion on Designer Synthetic Drug Testing?

None of these Designer Synthetic Drugs are glamorous, stylish, or classy.  They may be exotic, but they are “deadly” exotic. The worst part is that the statistics show that they are killing at greater levels, with faster and more deadly speed.  They can leave no time to second-guess the decision to use the drug if a victim gets a dangerous batch.  There is no advance warning sign of deadly danger.

The most proactive we can be to try to develop an Early Warning System is to drug test in jobs, clinics, schools, and other allowable places, in order to detect beginning drug use and discourage it, since the horror stories surrounding Designer Synthetic Drug use in our every day world — like on flyers on cars — is growing and unpredictable.  Plus, since the Designer Synthetic Drugs are cheaper and easier to get — and deadlier, building in some education and regular or random testing for these specialty drugs  in our programs just might discourage the beginning use of those drugs BEFORE someone you care about gets that dangerous batch of drugs that can’t be reversed.